The first branch of Wing Chun that spread all over the world was the one taught in the late 50′s, the 60′s and early 70′s by a master called Yip Man. Although his system got to be quite known in Hong Kong, were he was teaching, it was not until one of his students, Bruce Lee, made himself famous in movies, that people began to get interested in Lee’s original art. However, it was not only because of Lee’s fame, but also because of the characteristics of this close-range fighting style, that Wing Chun got to become probably the most practiced style of Kung Fu all around the world.

Among the martial arts, Wing Chun is famous for being astonishing effective in close-range fighting. Emphasizing the concept of sensitivity, Wing Chun relies upon a sense of touch in anticipating the movement and redirection of an attack. Unlike martial art systems based upon strength, Wing Chung utilizes speed, coordination and timing. There are only three empty-hand forms in Wing Chun: Siu Nim Tao or the “Small Idea” form, Chum Kiu or “Searching the Bridge” form, and Biu Jee or “Flying Fingers” form. The development of sensitivity and timing is obtained through the exercise of Chi-Sau or “Sticky Hands”. Finally, there are two weapon sets: the Luk Dim Boon Gwun (or staff) and the Baat Jam Do (or butterfly knifes). The simplicity in training allows a practitioner to gain a degree of competence within a short period of time.

With the emphasis upon the delivery of techniques from a strong, defensive posture, training in Chong’s Wing Chun will create self-confidence and realistic self-defense capability.

Sifu Eddie Chong’s Wing Chun lineage in the Yip Man system can be traced directly to Leung Sheung, Yip Man’s first and one of his most prized students.

The Pan Nam system of Wing Chun is a different branch from the popular Hong Kong system. It has been called this way after the late Master Pan Nam, who took Sifu Eddie Chong as his last disciple in 1991.

This story regarding the origin of Wing Chun and the theories of this branch can seem to be in conflict with those of various other Wing Chun systems, but this is not really a problem when understood and considered objectively. Though at first glance some of the differences are dramatic, each system in fact complements the other, and knowledge of the theories and techniques of the Wing Chun taught by Master Pan Nam can only improve one’s martial arts skills. Understanding the differences and the reasons for any changes that have occured, gives us perhaps our only glimpse into the minds of the early masters.

As for the differences, this branch of the Wing Chun family tree has not only preserved a different, possibly older, form of Wing Chun but also the Qigong (Chi-Kung) exercises that Master Pan said have been a part of the Wing Chun System from its inception. The techniques in Pan Nam Wing Chun are relaxed until the moment of initiating the attack. Pan Nam and Eddie Chong’s stance uses a 50/50 weight distribution. 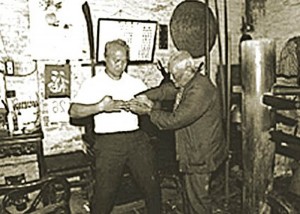 The toes are pointed straight forward and advances are made with stepping movements as opposed to dragging the rear leg. The system emphasizes triangular footwork, as compared to linear directions. The punches can be directed towards any line from the shoulder. In other words, the shoulders are considered the centerline.